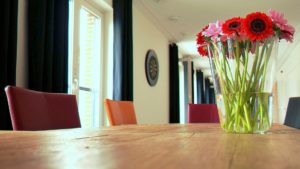 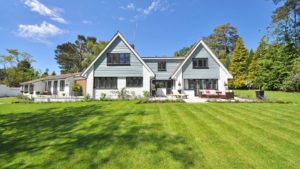 The town of Ardmore, named after an Irish word meaning high ground or hill, provides some of the finest suburban housing of the Philadelphia Main Line. With over 13,000 residents, Ardmore is both a residential and commercial center, located about three miles west of Philadelphia’s City Line Avenue. The town is characterized by stone mansions and brick colonials set along winding streets lined with trees, making it one of the most beautiful suburban settings of the state of Pennsylvania.

Ardmore was first created in 1686, when five Welshmen paid a certain Mr. Richard Davis thirty two pounds and sixteen shillings for 410 acres of land, in what is now known as the town’s main section. The area was first called Athensville by Dr. James Anderson because of his fascination with the Greek classics. In 1873, Ardmore officially changed its name because of the large quantity of other towns named Athensville.

Gradually, Ardmore grew into an important town of the Main Line region, and as such, a railroad station was built to provide transportation into the city. The Ardmore Station became one of the largest and finest stations of the Pennsylvania Railroad. Formerly known as Philadelphia and Lancaster Turnpike, Lancaster Avenue was the most important highway of the small village, and became the spine along which Ardmore services and retail began to grow. In 1889, the Merion Fire Company No. 1 of Ardmore, the first fire company in Lower Merion Township, moved into a lot on the north side of the Lancaster Pike, west of Ardmore Avenue. This firehouse also served as the township’s police station.

Ardmore was somewhat of an industrial town. In 1900, Autocar Works first opened as a large manufacturing industry, and spurred the growth of many businesses, several of which are still operated by succeeding generations today. The town’s first movie theater opened in 1921, and the Sun Oil Company built its first gas station on Lancaster Avenue around the same time.

The commercial growth of Ardmore paved the way for a new, revolutionary idea that would affect the rest of the nation for years to come. In 1927, the development of a series of shops clustered around a large department store, movie theater, supermarket, and businesses offices, began. This marked the beginning of one of the nation’s oldest shopping centers, Suburban Square.

The stock market crash of 1929 caused many of Ardmore’s industries to close down. As the town gradually recovered from the economic crisis, the industrial was soon replaced by the residential. Commercial life survived despite the town’s hard financial times, becoming one if its marking characteristics. Ardmore is now known in the Main Line region for its shopping and retail centers. The site of the former AutoCar plant is now occupied by a new shopping center, Ardmore West. Completed in 1973, this center holds slightly more mainstream businesses than Suburban Square, and houses a variety of modern shops, a bank and a fast food restaurant. Consequently, many of the surrounding businesses modernized their properties and increased their parking facilities, transforming Ardmore into a true commercial center.

Still thriving today, Suburban Square has become one of Ardmore’s main tourist attractions, and offers an array of exclusive boutiques and department stores such as Strawbridge & Clothier and Laura Ashley. In 1979, Suburban Square received a face-lift and acquired an open mall surrounded by small shops. The movie theater was converted into market stalls which offered a wide variety of foods.

Although Suburban Square lost its Guiness Book of World Records title as the world’s first shopping center, with its charming setting and small village atmosphere it remains today one of the nation’s favorite tourist destinations. The Suburban Square is nationally known for its upscale and diverse shopping experience, and houses both national and local retailers. The Suburban Square is also an important part of Ardmore’s communal life, and hosts many special events that help create a community environment, often substituting as a town center. With over 264,000 square feet of retail and an impressive array of restaurants, Suburban Square suits all styles and tastes.

In celebration of its 75th Anniversary the Suburban Square is currently expanding to include a new and improved Ardmore Farmer’s Market as well as a 8,000 square foot Trader Joe’s. The Ardmore Farmer’s Market is an important Ardmore attraction. The Market currently offers 17 fresh food vendors and the best in produce, seafood, meats, cheeses, baked goods, flowers, coffees and gourmet delis. The new expanded market will host 22 quality food vendors. Furthermore, a 18,000 square foot, two level retail/restaurant building linked to the regional train station is also expected to be built by 2004.

Shopping is not Ardmore’s only attraction, and the town offers residents and visitors many recreational facilities. The town’s two major parks, Ardmore Avenue and South Ardmore Playground, allow residents to swim, jog, play tennis, baseball or softball, or take a leisurely stroll around the scenic grounds. The Merion Golf Course provides avid golfers with picturesque settings. Finally, the Ardmore Community Center keeps kids busy with many after school programs, as well as providing tutoring for elementary and high school students.

We give Scott Furman and his team at RE/MAX Classic in Wayne PA, a 5 out of 5 rating. Several things stood out. First, he was honest about his view of the value of the house without pushing to sell at a particular price.

We are so pleased that Scott Furman found us the ideal new home within our budget and our time frame. We look forward to many wonderful years in this beautiful house!

Scott and his team made the process easy for us, in a highly professional and communicative manner. Within weeks of working with him, our house was sold!

Our association with Scott Furman was one of those experiences. He is detailed, business sharp , and always working for his clients. I hope that anyone reading this chooses the privilege of engaging Scott to handle your home. You will be impressed and pleased.